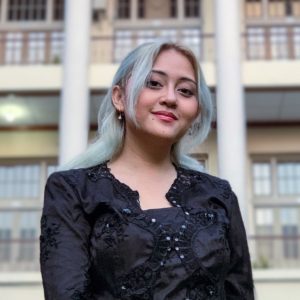 Zachranti Abianca “Abin” Hafsari is a student of IUP batch 2017. Ever since she was a child, she has a particular fondness towards the world of visual arts. She told us that it all started when she was a child, “around the age of kindergarten,” she recalled. During that time, her mother used to have a painting teacher come over to hone her artistry. Being a small child, Abin tried to imitate her, to which her mother noticed and had a mini easel placed beside hers. “I vividly remember the moment when I made my first painting. I was painting alongside my mom, who painted a scenery. I, on the other hand, painted a blue and pink house,” she told us. Her interest was brought to school at that time, making arts and crafts as her favorite subject.

Abin had her fair share of frustration when she was in high school. Arts became her major in high school, but the constant pressure to produce several art products in such a short amount of time. “I lost my interest towards arts because of the artist’s block. I didn’t even want anything to do with it anymore.” Abin did not think that arts can be a reliable career path and came to the realization that it is actually a hobby that she rather not turn into a profession. Unbeknownst to her, this feeling was what brought her closer to the world of psychology.

“Studying psychology helped me understand more of what was happening to me,” when asked why she turned to psychology. Being distanced from the arts gave her time to unwind from her artist’s block, and she started to re-explore visual arts in general. She took an interest in photography as she moved to Jogja, “there are lots of spots to hunt for photos, and that sparked my curiosity to see how those objects would look in a camera frame.” Further into her curiosity, Abin experimented by combining visual arts with poetry, and she manifested it in the form of videos. Her exploration also brought her to try her hand in fine handiwork. At the start of the Covid-19 pandemic, she took an interest in sewing and embroidery.

For her undergraduate thesis, she combined her past experience of having the artist’s block with psychology. Her title was’: Depression Tendency in Art Students: Problem or Source of Creativity?’ For the research process, she made an artwork that she used as a way to understand how her participants felt (check out her work down below). “I prefer to make artworks by hand as opposed to making them digitally on a computer. It helps me convey my emotions more freely and accurately, unlike digital media which has way less flexibility and freedom,” when asked what is her medium of preference.