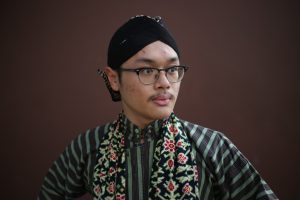 This is Matheus Raoul Supriyadi, he is a 2017 student of IUP Psychology who has a particular interest in the classical Yogyakartan dance. He did not realize his fascination until he moved from West Java to Yogyakarta. It all started when Raoul first came to Jogja in 2014 and went for a small trip to the Kraton (Royal Palace), where he saw a male dance performance taken from the epic of Ramayana. “As I saw the dance, strangely my mind did not wander at all. My only thought was that the dance was very masculine and elegant at the same time,” he told us. From there, he was finally able to start learning how to dance in 2017 considering the lack of free time he had in high school. “I prefer to dance the refined male characters as opposed to the coarser ones. My breath can’t catch up with the energetic movements hehehe,” he joked as he explained more about his specialty.

So far, he has performed several times as a solo dancer in the Royal Court and for the annual anniversary performances for UGM’s Swagayugama, the Yogyakartan arts organization. Earlier in 2021, he enrolled himself as a student in Yayasan Pamulangan Beksa Sasminta Mardawa (YPBSM), one of Yogyakarta’s most revered classical dance institutions, and secured some performance schedules in Sonobudoyo Museum and in YPBSM itself. He made an important statement saying, “I look at performances as an opportunity for development, and not as a point of achievement. Because you should never be satisfied with your current state as a classical dancer. Learning the Yogyakartan classical dance is a lifelong process.”

In spite of the recency, this fascination contributes to the focus of his undergraduate thesis research. Initially, he was conflicted about what topic he should focus on relating to Yogyakartan dance, but then he ended up researching about the psychological aspects that are present in the Yogyakartan Bedhaya after having a long conversation with Satwika Rahapsari, S.Psi, M.A., R-DMT., a lecturer in the Faculty of Psychology who is also a dancer for the Royal Palace. “What intrigued me was that the Bedhaya is ancient, so how is that not exciting? I get to learn about history, culture, and psychology all at the same time,” when asked about the reason for his choice. It was not always a smooth journey in the writing process, but it is a part of the learning process. During the research, he met practitioners, researchers, maestros, and very interesting people that share his interests in the Bedhaya.

Raoul told us that for him, psychology is a flexible discipline that can penetrate any phenomena involving human beings, and art is no exception. It is a product of human culture and aesthetics which of course, involves thoughts and processes.

“Oftentimes, people think I am a student of an art academy, but when I told them I was a student of psychology, people always ask me, ‘why dance?’ Well obviously, art is a product of culture and human cognition, so if that’s not psychology, I don’t know what is!”