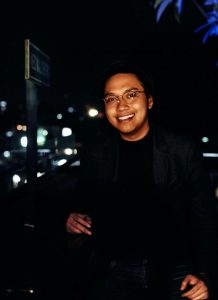 Harera El Muhalla of batch 2017 is also known by his peers as a talented musician. It’s rather rare for them to see Era not listening to music in one day. As musical as he is, Era was not actually born into a family of musicians. He attributed his musical abilities to the interest that he has towards music. “Not one of my family members is a musician. So for me, determination contributes far more to my abilities than talent does,” as he told us. He started out as an autodidactic piano player since elementary school. Having no formal teacher, he turned to tutorials on YouTube as his source of pop-oriented piano knowledge. “Of course, I thought of playing the piano as a fun activity for an elementary student. That’s what kept me going until junior high!”

Alas, his interest came to a halt as he entered high school. “What am I to do with my abilities? I felt as if I did not make any improvements,” he reminisced the frustration he had. The conservative nature of his high school did not help in his crisis. Thankfully, some friends of his are adept in certain instruments, namely the guitar and bass, and they were willing to share their musical knowledge with him. The role that Era’s friends played managed to rekindle his fascination towards playing musical instruments.

By the time he became a student in UGM, he joined the Gadjah Mada Chamber Orchestra (GMCO) as a place to express his passion. There he met very interesting people with different musical backgrounds playing various musical instruments. The good thing is, Era’s curiosity and thirst for knowledge never failed him. He conferred with woodwind players, and started learning to play the saxophone and clarinet. When we asked him why he chose the two instruments, he replied “something happened to me personally that gave me the need to gain my confidence back. Considering that the general audience are still in awe when seeing saxophonists, I decided to choose that instrument.” There, he also tried his hands in arranging several compositions for GMCO’s 2021 mini concert.

In the end, he told us that music has become such an important part of his life, and that some of his most memorable experiences revolve around it. During his exchange period to the Vrije Universiteit Amsterdam, he brought his saxophone and clarinet and took them to the streets. He busked his way in front of the Van Gogh Museum, gathering tourists and locals alike. “It’s a moment of pride for me. Having my music heard and appreciated by strangers.” While in Amsterdam, he also got the chance to perform in the 2019 annual meeting of a popular travel website, in which he played Shostakovich’s Waltz no. 2 on the saxophone. A classical piece that we know is not undemanding to perform.